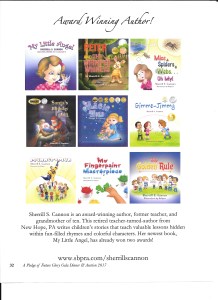 I am delighted to announce that I am now under contract for another children’s book!!!  This one is a little different, since it’s for slightly older children (grades 2-4) and helps explain the issues and problems and possible solutions when dealing with children diagnosed with ADHD.  (Attention-Deficit/Hyperactivity Disorder).  It is a treatable, neurobehavioral disorder found in kids, teens and adults.  It involves moments of being inattentive, impulsive or hyperactive, which have an impact at home and at school. According to some internet statistics, It is estimated that nearly 17 million Americans are affected by ADHD.

This story originally came about several years ago, in response to a child of a friend who was diagnosed with ADHD.  I had just started writing children’s stories, and while having dinner together, I read the story of Peter and the Whimper-Whineys to David and his family.  David said to me, “I wish there was a story for kids like me…”  So now there is!  David’s ADHD is now under contract!!!

I shared the story with a friend who wrote: “You cover the symptoms and the problems they create really well and I like the the story is so hopeful and positive.  This will be so good to have in libraries and classrooms so kids can learn about ADHD kids they might know and learn to be understanding and patient with them.”  It has also been shared with a friend who is a Clinical Social Work/Therapist and several teachers. (An earlier version of this story was included in an anthology, and was shared with an ADHD support group in upstate NY.)

I look forward to sharing the story with all of you upon publication. I am delighted that my wonderful illustrator Kalpart will be illustrating this new book also.  Stay tuned (please!)

7 thoughts on “Under Contract for Another Children’s Book!”