Fun to Find on Facebook – Winners of the Purple Dragonfly Awards – David’s ADHD!!! 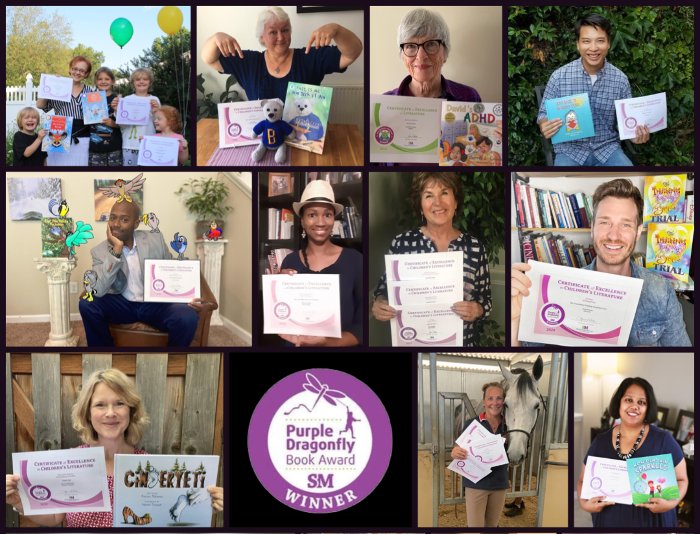 Deadline for Entries for the next year’s awards is May 4th!  Please check it out, and enter your books!!  (I’ve already entered Peter and the Whimper-Whineys Coloring Book!)  Great contest!!

Newly Released: The Golden Rule Coloring Book – A coloring book version of the popular The Golden Rule suggests ways children can learn to be kind to each other. Identical to the original book, the illustrations are in black and white outlines so that young readers can create their own version of the story.  What if everyone treated others the way that they themselves would like to be treated?  Perhaps today’s youngsters can figure it out!!! ISBN 978-1-68235-338-7 – $10.95

Winner of 2 Awards: Peter and the Whimper-Whineys Coloring Book – Stop Whining, Whiners, Interactive Coloring, Children’s Manners. This coloring book version of the best-selling “whine-stopper” children’s story was designed for kids to enjoy reading the rhyming, as well as being able to illustrate their own version of Peter’s nocturnal adventure into the woods. Just read all whining text in a whining voice, and your children will understand how annoying whining can be!  The book is the Gold Medal Winner of the Book Excellence Awards Coloring Book, and H.M. in the Royal Dragonfly Awards Children’s Activity Book.  ISBN 978-1-952269-68-4 – $9.95

Winner of 13 Awards: David’s ADHD – Meet David, one the “Classroom of Kids,” who manages his ADHD with the help of classmates. Actually, David has been part of the class for a long time! It has received a Gold Medal in the Book Excellence Awards, a Gold Medal in the FAPA President’s Awards, 1st Place in Purple Dragonfly Awards plus HM in another category, two Silver Medals for both Children’s Early Readers and Poetry from Feathered Quill Book awards, Winner of Barefoot Librarian Award as well as Silver Medal for Early Readers from Reviewer’s Choice Awards, a Bronze Medal in the eLit Book Awards, an Honorable Mention in the prestigious Readers Favorite Awards, Story Monsters Approved Winner, Top Shelf Magazine finalist, & a Pinnacle  Achievement! ISBN: 978-1-950860-43-2 $12.5

Winner of 8 Awards:  My Little Angel – Please share a day in the life of a little girl, while her guardian angel Angela sits on her shoulder and keeps her safe and guides her throughout her various activities throughout her day. It has received a Book Excellence Gold Medal, a Feathered Quill Bronze Medal, a New Apple Book Awards Official Selection, Readers’ Favorite Finalist Award, a Royal Dragonfly H.M, an IAN Book of the Year Finalist Award, and a Pinnacle Achievement Award.  ISBN:  978-1-68181-947-1 – $12.00

Winner of 9 Awards, The Golden Rule – What if you treated others the way you’d like to be treated?  What if everyone did that?  What kind of world could there be? Please join in the children’s quest to discover how to follow The Golden Rule. The book has won a Book Excellence Award Gold Medal, eLit Gold Medal, Reviewers Choice Silver Medal, Children’s Literary Classics Silver Medal & Seal of Approval, Mom’s Choice Silver, Readers Favorite Finalist Award, IAN Book of the Year Finalist and Pinnacle Achievement Award.  ISBN 978-1-68181-326-4 – $12.50

Winner of 5 Awards, Mice & Spiders & Webs…Oh My! illustrates the importance of being a good listener. It also is an introduction to basic computer terms. Rosemary is worried about returning to school, after her teacher has warned the class that they would soon have some mice, spiders and webs in the classroom. It has won a Global eBook Gold Medal, a Bronze Medal in the FAPA Awards, a Readers’ Favorite H.M. Award, a Reader Views Reviewers Choice H.M and also a Pinnacle Achievement Award ISBN: 978-1-63135-949-1 – $13.00

Winner of 9 Awards, My Fingerpaint Masterpiece deals with perspective, perception and self-esteem as a child fingerpaints artwork in class, and later discovers it as part of the town’s Art Contest.  Winner of a Readers’ Favorite Gold Medal in Children’s K-3, as well as their Illustrations Award, a double Finalist in the Next Gen Indie Awards, a National Indie Excellence Award, a Global eBook Bronze, a Reviewer’s Choice H.M., Children’s Literary Classics Seal of Approval and a Pinnacle Award   ISBN 978-1-62857-288-9 – $12.50

Winner of 10 awards: Winner of the 2014 CLIPP Principals’ Award, the KART Kids Book List, the Reviewers Choice Award, Los Angeles Book Festival, Global eBook Silver Medal; as well as a 2013 Readers Favorite Silver Medal, National Indie Excellence Finalist, a Pinnacle Achievement Award, and H.M. in the London Book Fair and Rebecca’s Reads Awards. Manner-Man is a Superhero who helps children cope with bullies,and teaches them how to look within themselves for their own superhero. ISBN: 978-1-62212-478-7 –  $12.50

Winner of 5 awards: Winner of the 2013 Global eBook Silver Medal, Indie Excellence Finalist and Reader Views Finalist Awards as well as the 2012 Readers Favorite Silver Medal Award and the 2012 Pinnacle Achievement Winner Award. Gimme-Jimmy is about how a bully learns to share.  His “New Polite Rule” helps him learn to make friends. ISBN 978-1-61897-267-5   – $13.00

Winner of 3 Awards: Winner of the 2021 Reader Views Reviewers Choice Gold Medal Children’s Classics Award, 2011 ReadersFavorite Bronze Medal and the 2011 USA Best Books Finalist Award.  Peter and the Whimper-Whineys helps parents cope with whining, disguised as a fun story. Peter is a rabbit who whines all the time, and might have to join the Whimper-Whineys. ISBN 978-1-60911-517-3   – $13.00

Peter and the Whimper-Whineys Wins Gold in Children’s Classics!

This book also received a lovely comment…posted on Linked-In:

“Sherrill., your books are amazing and have inspired my children and grandchildren over the years and I want to thank you so much for it all…”

And thank you to my wonderful illustrator, Kalpart, for illustrating ALL of my award-winning books.  Award total is now 94!!!

( The Peter and the Whimper-Whineys Coloring Book is also available now – for all those with artistic children who love to color!  Let them color whining away!!!)

So wonderful to have some of my books featured, and The Golden Rule read aloud, as part of the International Read Aloud Day, by Maritza Mejia...  Click on the link below to listen to the reading, and see the book and illustrations.

Books written by various authors, both in English and Spanish, were included in the presentation!  Please take a moment to listen!!

The Golden Rule is also now available as a Coloring Book, for those of you who have budding artists in residence…!

So delighted to receive this email from the Book Excellence Awards

It is with great pleasure to announce that you have been selected as a Book Excellence Award Winner for the following book and category:

There were hundreds of entries from around the world and your book was selected for its high-quality writing, design and market appeal.”

This is the second award for this coloring book, and my 94th overall…

Read this book with your child, and use your very best (worst) whining voice for Peter and the Whineymen…  Your child will get the subliminal message, while having fun illustrating the book as well!!!