What fun to discover that the Peter and the Whimper-Whineys Coloring Book is now available from both amazon.com and BN.com

This is the original complete book of the best-selling Peter and the Whimper-Whineys, but the illustrations have been traced so that they are available for young readers to color them creatively!

Please share the book with your budding artists, and help them discover how annoying whining can be.  Just read all the whining lines in your best whining voice, and help stop their whining as well!!!

If any of you would like to share your young artist’s interpretation of any  scenes, I would love to have you share them with me.  (I will not share on my blog without permission, but would love to share if it’s OK.) 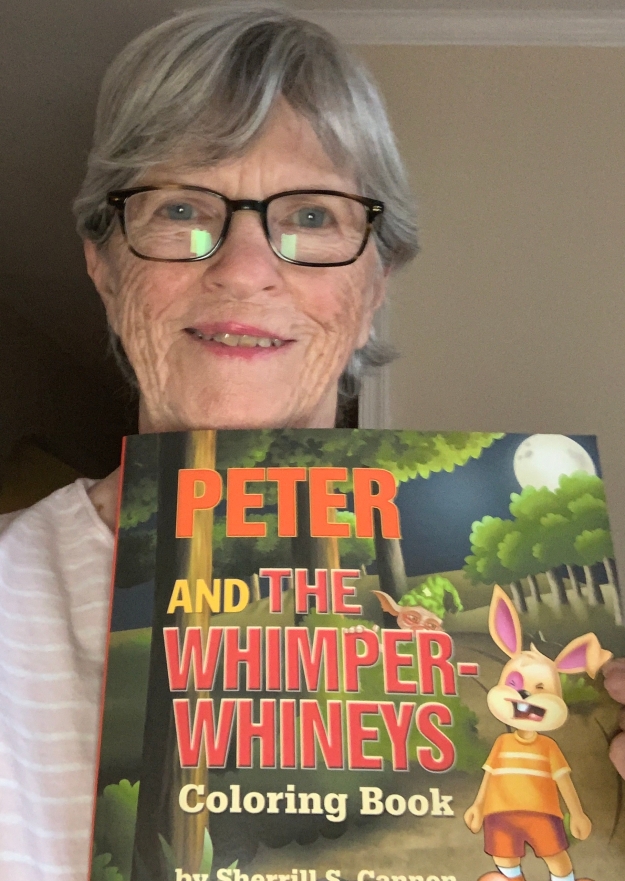 To Be Released Soon! Peter and the Whimper-Whineys Coloring Book –

This coloring book version of the best-selling “whine-stopper” children’s story was designed for kids to enjoy reading the rhyming, as well as being able to illustrate their own version of Peter’s nocturnal adventure into the woods.

Just read all whining text in a whining voice, and your children will understand how annoying whining can be! 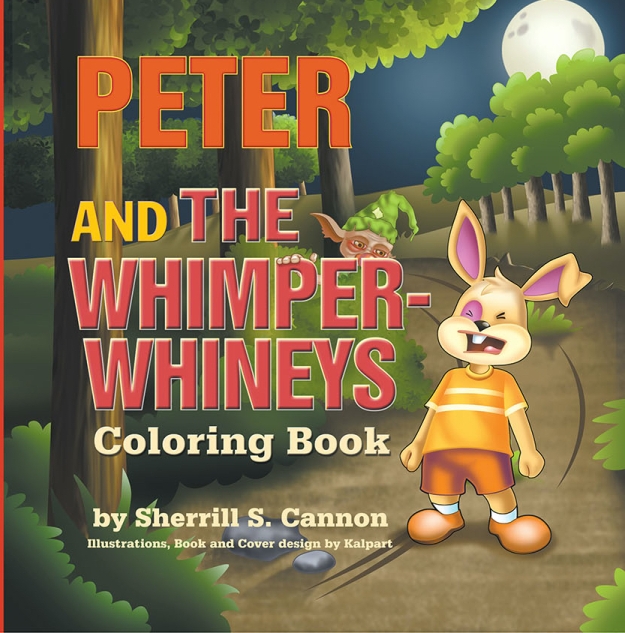 Peter and the Whimper-Whineys Coloring Book

I’m delighted to reveal the cover of my soon to be released Peter and the Whimper-Whineys Coloring Book!  Yes, the favorite of so many children (not to mention the parents who have appreciated a lot less whining) will soon be available for young artists to be able to color the illustrations their own way!

The story is the same…reminding youngsters of the perils of whining…but the opportunity to illustrate Peter’s nocturnal adventures will be available to all!  I am hoping many children will share their interpretations with me… I will post many of them on my website!!  (www.sherrillcannon.com)

PS – The actual book, Peter and the Whimper-Whineys, beautifully illustrated by Kalpart, is also still available in soft cover as well as eBook on amazon.com and barnesandnoble.co

The annual lovely Awards Banquet will not be held this year because of Covid19, but the results will be released soon.  (Stay tuned!)

I am so pleased that this book has been so well received, and hope that it will help many children, classmates, teachers and parents cope with this now manageable problem.

A wee while ago Sherrill S. Cannon published her second book of poetry, A Dime is a Sign, as a companion to A Penny For Your Thoughts. It’s an empathetical book (not an autobiography), but the way she puts her “Feelings Into Words” (the byline of the book), you can imagine yourself in the emotional roller coaster of love.

I was very touched by Sherrill including me in her list of “special mention and many memories” section of her Thank You page, it really means a lot to me, to have ‘met’ Sherrill not long after I first began blogging and have formed a friendship with her, which isn’t something that happens often. Thank you, Sherrill, for almost a decade of friendship!

Sherrill has been writing mainly children’s books over the past decade, but now has 2 adult poetry books under her belt, along with (at last count) 85 awards for her books – wow! That is definitely an accomplishment not many writers receive, and is a testament to her skills.

A Dime is a Sign is divided into three main topics:

Here’s a sample of the poetry, the piece upon which the name of the book was based:

If you find a dime,

You will know that I’m

Through the veil of time.

Ten cents with a silver shine,

A sense sent you to help remind

That someone who left you behind

Is always living in your mind.

The ones that you miss,

Send you a kiss…

In her children’s books, Sherrill is well known for her rhyming prose, but in her poetry, much of it does rhyme, but there are other forms as well. And like love, some poems are short and sweet, while others are longer and more complex.

I found that sometimes I would simply sit and read a poem or two during the day, and at other times I would read several in the evening before falling asleep to relax and quieten my brain while waiting for slumber to find me.

Most of the poems are written in the first person so it’s easy to put yourself in the soul of the poem and many of them will have your own memories brought back into the present. Happy memories, as well as some that would better be forgotten, but are still a part of you.

If you enjoy the poetry of love, I’d encourage you to purchase A Dime Is A Sign, sit back, and enjoy the melancholy of the past and the hope of the future while living for the love of today.

Don’t forget to have a look into Sherrill’s other books: 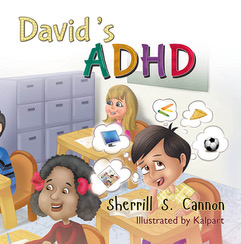 Meet David, one of award-winning author Sherrill S. Cannon’s “Classroom of Kids,” who manages his ADHD with the help of classmates.

David discovers ways to cope with his hyperactive brain, while learning how to calm and soothe his ADHD. Solutions include setting daily schedules and following simple rules that regulate behavior. His teachers and therapists encourage using the computer for academic advancement, and to establish a pattern for study as well as for occasional recreation. David not only learns self-control and communication skills, but is able to fit into the classroom and make friends.(from publisher)

He’d seem very angry and then lose his cool,
But this didn’t bother the kids in his school.”

Young David has trouble at school and at home. He is fidgety, disruptive, inattention and quick to erupt, often yelling instead of speaking. He can become very angry for no apparent reason. Other kids do not want to play with David. His frustration level causes David to react inappropriately. His parents are overwhelmed, yet never give up.

Soon a doctor diagnoses David as having ADHD:  Attention Deficit Hyperactivity Disorder. With help from a therapist, a doctor, his parents, and his school, David learns how to cope, how to pay attention in class, and how to express his emotions properly.  He even learns how to get along with the other kids. This is David’s story.

Author Sherrill S. Cannon has written many picture books, all award winners. Her text is bouncy, easy to read, and usually quite funny.  I love Ms. Cannon’s books for those reasons and more. David’s ADHD is different. The author’s trademark rhyming text remains and her artist’s iconic characters, many of whom appear in her other books, return for another story. Yet, David’s ADHD is a more serious tale. David exhibits many of the typical symptoms of ADHD.  He needs the help of his family and friends to learn a new way of living; one that helps him control his symptoms and his emotions.

Despite being on the wordy side, David’s ADHD will help children understand what some of their classmates are going through each day. It might even help them understand their own actions and feelings. The ADHD brain tends to be deficit in a neurotransmitter called norepinephrine. This “ADHD nervous system” is the cause of the symptoms of inattention, hyperactivity, impulsivity, and mood regulation.  I must admit, despite a working understanding of ADHD, I am lost on the author’s explanation of the disorder’s symptoms and their origin:

“We all have a camera that lives in our head.
It gives us bright pictures of all that is said.

“The lens helps us focus, to make things seem clear.
Dave’s couldn’t connect with his eye or his ear.

“The focusing lens was asleep in his brain.
He needed some help to wake it again,

ADHD is a difficult disorder to explain without mentioning which brain functions are involved. I’m guessing the above is an attempt at an explanation children can understand. It is difficult to know for sure due to the lack of a reference section, which can be a big help when dealing with non-fiction subjects.

David’s life with ADHD, including its symptoms and daily functioning, is wonderfully detailed and realistic. Children who read David’s ADHD should go forward with a better understanding of life with ADHD. In addition to understanding, the text has the empathy David, and kids like him need to succeed. Hopefully, readers will recall this story and share that empathy with classmates who need it.

While I think the story is a bit long for younger children, Ms. Cannon handles the subject with her usual composure and skill. I like how she highlights the importance of everyone in David’s life being part of his success; from classmates understanding his outbursts and teachers knowing how to motivate David, to his family helping him succeed at home and in the community.

Clinicians will find David’s ADHD helpful for clients and their families. Kids with the disorder will find hope and humor in David’s story, especially when realizing the story is about a real kid named David (and a grandmother determined to fill a need—specifically, letting kids with ADHD read a story with a character they can recognize as themselves). Teachers can turn to David’s ADHD when needing to explain ADHD to students or as part of a science class.

David’s story imparts hope and understanding where both can often be lacking. Most importantly, David’s ADHD has the power to influence anyone who reads this story. Like most disorders afflicting kids, the cure begins with empathy and understanding. David’s ADHD contains both. Highly recommended.

I like the illustration of David and his parents at the doctor’s office. What I find impressive is the artist (Kalpart), has the doctor talking directly to David, who sits closest to the physician. The doctor is giving David permission to take control of his ADHD, while (presumably), giving him tools to do just that.